The Minyon Family is the first episode of Season 2 of the American Supernanny show.

Princess Skyler frequently fights with her mom by throwing emotional, but violent temper tantrums. She does it by hitting, kicking, screaming, demanding and crying. Skyler would hit her mom or vice versa.

Frank sees Skyler as a little princess. Everything that Skyler does in front of him is cute.

Meanwhile Frank Patrick is not favored by his dad. His dad thinks of him as a brat while he doesn't get any attention from his mom. Can Jo help the Minyons?

We learn that their last name is pronounced the same as "Mignon". Danielle admits she did not realize having kids would be so different from what she imagined. Skyler is difficult, with rage issues. Frank Patrick does not get much attention and feeling left out because of her. It's hard getting Frank up in the morning. Frank just wants his family to be happy and Danielle wants Jo to figure out how to control her daughter's temper tantrums.

Jo arrives at the Minyon house at 6:15am, because the family said they have issues with the mornings. Because Jo's presence was so powerful, like a principal's, Frank Sr. said he felt like school was about to begin. Danielle goes back and forth between the kids' bedrooms to wake them. After several verbal attempts fail, she tells Skyler that "The cops will come and get her if she's not in school!". Skyler is hardly awake when she throws a tantrum. Danielle struggles to get her daughter dressed. Jo says it's clear Skyler makes the rules in the house. Danielle then proceeds to physically dress Frank Patrick. "Otherwise," she says, "She'll fight with him all morning." Frank Sr. meanwhile slowly gets ready for work and does something on his laptop while Danielle struggles. Danielle reports she would like Frank to help more. Skyler will not let Danielle dress her, so both Danielle and Frank hold her down to get her dressed. Danielle admits to Jo that she hates going through all this drama and getting Skyler upset for such a little thing like getting dressed. She'd rather just let Skyler have her way so she doesn't get so upset. Meanwhile, Frank Patrick makes and eats his own breakfast and gets himself on the bus. Danielle drives Skyler to preschool without shoes on or her teeth brushed.

Skyler runs from the table during snack and will not return when Danielle asks her to. Jo observes Skyler controls everyone in the house. After school Jo asks Frank Patrick if he gets much time with his parents, which he does not. Skyler won't put cushions back on a chair, so Danielle puts her in timeout. At first Jo is happy to see an attempt at discipline, but it doesn't work because Danielle never leaves Skyler alone. Instead, Danielle holds Skyler down in the chair. Skyler slaps her mother, and Danielle slaps her in return and yells. Frank Jr. removes himself and plays a video game downstairs while the chaos continues. Danielle ends up giving in, hugging her daughter instead of disciplining her. Jo asks Danielle if that solved anything, and she admits it didn't. Jo notices that Danielle is also in need of a hug after this but nothing gets resolved.

Frank comes home. He enters the kitchen, kisses Danielle and hugs Skyler. He tells Jo, "Skyler can do no wrong, she's precious and everything she does is cute." Frank then looks for his son and comments that Frank Patrick almost never greets him when he comes home from work. He goes to Frank Patrick's room and greets him by saying, "Am I bothering you?" in a snarky manner. Later in the kitchen, he pushes Frank Patrick away every time he tries to hug him. Frank admits to Jo that there isn't much interaction between Frank Patrick and himself, and theorizes it may be because he feels they have absolutely nothing in common, combined with Frank Patrick's propensity for talking in one-word sentences. Frank feels like this is how a father is supposed to interact with his son.

Jo compliments their beautiful, young family. She points out that it's silly that a 7-year-old doesn't dress himself. Having two parents dress one 4-year-old is also silly. Frank says this is because she's the baby of the family. Jo points out how awful Skyler's kicking, slapping and screaming is, as well as Danielle's yelling and slapping, while Frank Patrick is hiding from all of it. He is devoted to his computer games, because they give him more attention than his parents do. Danielle cries.

Jo says Frank Patrick needs his parents' support. Frank says that their son just needs to be stronger. "You mean take your flak?" Jo says. Frank says he just feels boys should be raised different. Jo says it sounds like Frank thinks he doesn't need to treat his children equally. Frank says Danielle is just as guilty, but Danielle admits they need to change it.

Jo points out that Frank and Danielle expect their children to be intimate with people when they don't want to be. Frank says he would like to just see "A hello, hi, handshake, acknowledgment." Jo points out that they don't do this with each other as a family, so they shouldn't expect the kids to do that with other people. They need to have realistic expectations.

Jo brings in a family routine, which starts with waking up Frank Patrick at 6:30am. and includes outdoor play time after school. Jo wants Frank to do homework with Frank Patrick every day with lots of encouragement and support. Frank likes the idea of a time of day just devoted to his son and him. Jo also brings in a Reward Chart with tokens. Danielle likes this idea.

Skyler melts down when Danielle makes dinner for the whole family, because she wants Danielle to hold her constantly. Jo reminds Danielle that picking Skyler up only teaches her that screaming works. Jo coaches her in dealing with Skyler in a way that is similar to the Off-The-Hip technique, but that does not go over well with Skyler.

Skyler slaps her mother and continues to scream and cry. Danielle gives her a warning, but Skyler ends up on the Naughty Chair. Frank Sr. reports that seeing Skyler take it so hard made him want to just pick her up and take her away. It takes Skyler an hour and a half to do her time and apologize to Danielle.

Jo returns in the morning to introduce the Rise and Shine technique. Frank Patrick does well and his parents praise him. Danielle is surprised and doesn't know what to do with the extra time not spent in dressing Frank Patrick herself. Frank Patrick proudly exits the house to board the school bus.

Jo observes that Skyler never initiates any form of conversation, even "Hello" or "Goodbye." Jo practices Socialization with Skyler to show Skyler how important it is to say "Hello" and "Goodbye," and thinks she made progress. Jo works with the parents next by using the Chalk Circle to show them how their children feel when their personal space is violated. Before leaving, Jo introduces a feelings chart for Frank Patrick to help him communicate better with his parents. Jo has no doubt the parents will be tested while she's gone.

Frank Patrick again does well with the Rise and Shine technique and gets up when his alarm went off. Skyler didn’t want to go to school or get ready for school, but Danielle was in control and there wasn't a fight. Skyler ended up going to school in her pajamas with her clothes in her book bag with no temper tantrum. The parents are still using the tokens, but Danielle is promising them too many at once. Frank says, "I don't know, 5 tokens?" Frank Patrick says, "It's 2 tokens if I wash your car!" Jo observes that Danielle should not be using the tokens as a bribe.

Jo praises Danielle for following through with Skyler on the Rise and Shine technique, calling it "a major leap." Jo points out that the parents are overusing the tokens; a few days ago, they were happy with just one token, and now they are asking how they can get 5 or 10 tokens. She advises to keep it simple.

Jo has Frank and Frank Patrick talk about Frank Patrick's Feelings Chart. Frank plans to ask Frank Patrick about it every day so that they have conversations about how Frank Patrick is feeling. Jo explains to Frank Patrick that whining is a poor form of communication. It annoys and frustrates people. Frank apologizes to his son for being frustrated by things like that. Frank feels he has a new start and new approach.

Jo coaches Frank on handling homework time better. She tells him to focus on encouragement and if he feels frustrated, to just stand back and recognize how Frank Patrick is feeling. Most important is giving praise. Frank and Frank Patrick end homework time calmly and happily.

When family comes over, Skyler opens the front door, says "Hello!" and even hugs the visitors. Frank spends time with the kids during the visit to help them feel at ease. Everyone is eating pizza while people dance around and pass around a giant pair of sunglasses. "Skyler, look at Gigi!" exclaims Danielle as an 80-something woman dances around in the giant heart-shaped sunglasses. "You look funny!" Skyler shouts at Gigi.

Once the party is over Jo hugs the entire family goodbye and leaves for good, glad that Danielle is back in control. Frank Sr. is grateful for the major impact Jo had on his family. Frank Patrick reports, "A lot of big things have changed because of Jo-Jo." Jo hopes Danielle and Frank continue with the progress they made.

Frank feels things have turned around. Danielle reports the mornings are a huge change. Frank Patrick says that his parents are better because his sister is happier and nicer. Frank's eyes have been opened, and he now knows better what his son needs. Danielle says everyone is doing their part to make things work.

This episode was filmed in April 2005. 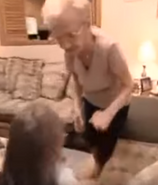 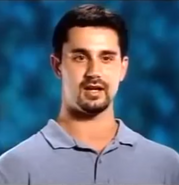 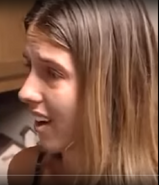 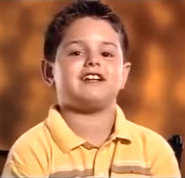 Add a photo to this gallery

Retrieved from "https://supernanny.fandom.com/wiki/The_Minyon_Family?oldid=183569"
Community content is available under CC-BY-SA unless otherwise noted.